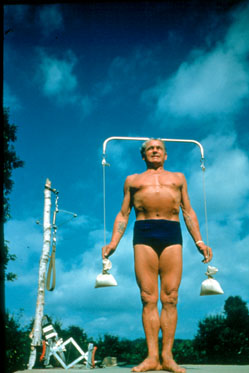 "A body free from nervous tension and fatigue is the ideal shelter provided by nature for housing a well balanced mind, fully capable of successfully meeting all the complex problems of modern living"

Joseph H Pilates liked being photographed in his pants...

A brief history of Joe:

Joseph Pilates was born near Düsseldorf, Germany in 1880. Little is known about his early life, but he appears to have been a frail child, suffering from asthma, rickets and rheumatic fever. His drive and determination to overcome these ailments led him to become a competent gymnast, diver and skier.

In 1912 Pilates lived in England working as a circus performer, boxer and self-defence instructor. During the First World War, he was interned with other German nationals. During this time he developed his technique of physical fitness further, by teaching his fellow internees. During the latter part of the War, he served as an orderly in a hospital on the Isle of Man where he worked with patients unable to walk. He attached bed springs to the hospital beds to help support the patients' limbs, leading to the development of his famous piece of equipment known as the 'Cadillac'. Much of his equipment, although slightly adapted, is still in use today in many Pilates Studios.

The Pilates method has gradually evolved and integrated current biomechanical thinking. However, the roots of the technique are steeped in the philosophy and movement patterns designed by Joseph Pilates over 70 years ago. Today his core method is still taught, as well as an evolved form by teachers of the Pilates Foundation.

It is practiced by men and women of all ages, from new mothers to elite athletes and sportsmen. Most football and rugby teams now incorporate Pilates into their fitness regimes. 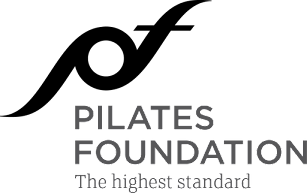